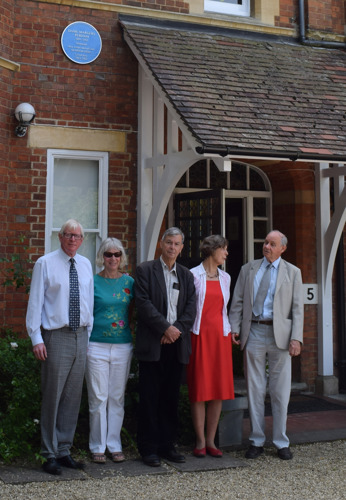 Nuffield’s first Official Fellow Dame Margery Perham has been commemorated with a new blue plaque at her former home in North Oxford.

Margery was a major authority and advisor on African affairs in the time when many Commonwealth countries were moving towards independence. Her vision and ability made her a pioneer in colonial studies from the 1920s onwards. She encouraged and befriended emerging African leaders such as Kofi Busia and Tom Mboya.

Margery became the first Official Fellow at Nuffield, and at the time its only woman Fellow, in 1939. She founded the Oxford Institute of Colonial Studies (later renamed the Commonwealth Institute) which she directed from 1945 to 1948. She was the first woman to be invited to give the BBC's Reith Lectures in 1961.

The new plaque was proposed by Oxfordshire Councillor Susanna Pressel as part of a bid to include more women on blue plaques throughout the county. It was installed at 5 Rawlinson Road on Saturday 1 June, where Margery lived from 1963 to 1982, and Senior Research Fellow John Darwin gave a tribute to Margery at the ceremony.

The Oxfordshire Blue Plaques Board remarked, “We are especially pleased to be able to add another remarkable woman to the list of those honoured under the scheme.”

More information about Margery Perham and her plaque is available on the Oxfordshire Blue Plaque Board’s website.