New research carried out at the Centre for Social Investigation, which analyses the impact of National Citizen Service (NCS) on 16-17 year olds from a range of backgrounds and geographic groups, has been published.

The Research was carried out at the Centre for Social Investigation (CSI) by James Laurence (University of Manchester), who was Research Fellow at Nuffield College last year. The report is an important step towards understanding and improving social integration among young people, especially among those that face the greatest barriers to social integration. 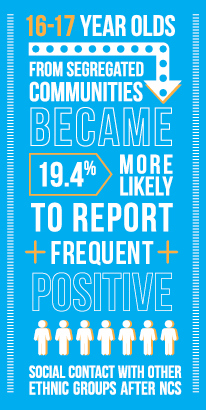 NCS is a government-funded initiative bringing 16-17 year olds from diverse backgrounds together with the aim of improving social integration through a  four week programme that includes outdoor team-building exercises, a residential for participants to learn ‘life skills’ and a community-based social action project to give something back to where they live.

While previous evaluations of NCS focused on its impact across all young people, this report aimed to evaluate the impact of NCS on those who were less socially integrated to begin with. 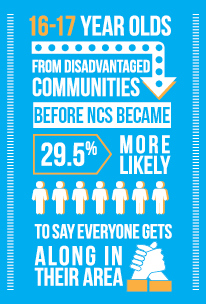 In order to measure the effectiveness of NCS, a sample of those who participated in the 2015 programme and a sample of young people who expressed interest in the programme, but did not participate, completed surveys before the programme began and 3-5 months after completion. Changes in social integration were then compared between the two groups in order to measure the impact of NCS.

Not only do the results of the report show a positive correlation between participation in NCS and the social development of young people, the improved understanding of how NCS affects young people from different social backgrounds will also allow the NCS to increase their positive impact on young peoples’ attitudes to social mixing and integration.