Two new reports tackling two big issues for Brexit have been published by the Centre for Social Investigation at Nuffield College. The reports provide further details on public opinion around the questions: 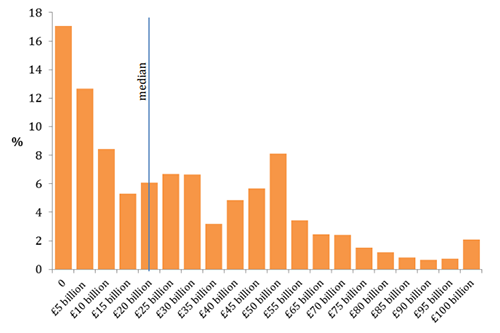 The so called “divorce bill” or “exit bill” is a central issue in the Brexit negotiations, and has been described as a “sticking point” by the EU’s chief negotiator, Michel Barnier. Figures from €40 billion to over €100 billion have been mentioned by ministers and the media from various calculations, little of which is explained in detail in the public domain. So, how much are people willing to pay for the Brexit divorce bill? Perhaps not surprisingly, more respondents in the CSI survey gave amounts at the lower-end of the scale, and the most frequently given answer was zero. (See image.)

But how did the answers given vary across different groups?

The analysis of surveys shows that Brexiteers and Remainers, unsurprisingly, differ in the amount they would be willing to settle, with individuals who desire a closer relationship with Europe who are willing to pay more for the divorce bill. Socioeconomic and demographic factors, on the other hand, seem to have a smaller influence on the amount that people are willing to pay. In the absence of information about the components of the bill, therefore, it appears that identities and other attitudes matter the most, rather than demographics.

The issue of free movement is also seen as a priority in Brexit negotiations, with immigration one of the two most frequently cited reasons for voting Leave in the EU referendum; the other being ‘sovereignty’.

Polls and surveys conducted since the referendum indicate that most Britons want a deal where Britain regains control over EU immigration. In addition, a sizable majority of the public believes continued freedom of movement would not respect the result of the referendum.

However, CSI’s analysis of their new Brexit data, an online survey of ~5,300 people, suggests that Britons may actually be more willing to negotiate about ending freedom of movement than about ending ECJ jurisdiction, ending contributions to the EU budget, or ensuring UK citizens’ rights.

Visit the Centre for Social Investigation