On Saturday 17 February 2018, a Memorial in honour of Sir Tony Atkinson was held at Nuffield College.

Tony, one of the most distinguished economists of the 20th and 21st centuries, and Warden of Nuffield College from 1994 until 2005, passed away at the age of 72 on 1 January 2017. A year later, a group of almost 400 people including his family, friends, colleagues, and students, gathered at College to remember his remarkable character and extraordinary intellectual output.

The day started with the second part of a two-day seminar covering Tony’s work on inequality and poverty, the first half of which had been held at the LSE on 16 February. The two sessions, on “Data, wealth and incomes and their distribution, gender and also the presentation of data,” and “Poverty Measurement Around the World” included contributions from many of Tony’s successors in the study of inequality, who all remarked on the huge impact Tony had on their academic career. 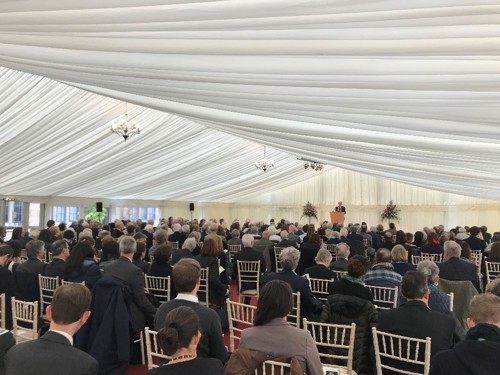 In the afternoon, the Memorial event took place in a marquee especially set up in the College, covering almost the whole of the Lower Quad, including Nuffield’s pond. After a few introductory words from Sir Andrew Dilnot, current Warden of Nuffield College, Tony’s wife Judith (née Mandeville) remembered with fondness the love and affection that the couple shared, from their times at Cambridge as undergraduates when they were 19, through more than 50 years of marriage.

A few of Tony’s colleagues then spoke not only of his tremendous life achievements, but also of his warmth and generosity of spirit. Lord Nick Stern remembered Tony’s great contributions to social and public policy in the UK and internationally throughout his career, from his first book to his major report in October 2016 on Monitoring Global Poverty, completed as chairman of the World Bank Commission on Global Poverty. Holly Sutherland perfectly summarised Tony’s character by referring to him as a “gentle generous genius.”

A few of Tony’s favourite songs were played during the Memorial, including Blowing in the Wind by Joan Baez and Sugar Man by Rodriguez. The event ended on the notes of Within you without you by George Harrison.