Abhi Parajuli is a graduate student who is about to embark on his DPhil in comparative politics at Nuffield College. He advocates student engagement in public debate and spent the summer of 2017 writing a number of articles for the press and appearing on television news programmes.

In an article for the South China Morning Post (Hong Kong's largest English language newspaper) about Chinese foreign policy, Parajuli argues that with the opening of its first overseas military base, China should acknowledge that it no longer follows a non-interventionist policy. 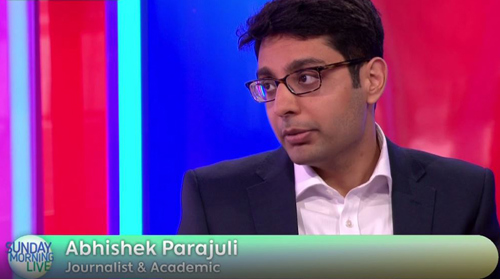 He appeared on the BBC programme Sunday Morning Live (series 8, episode 7) to talk about foreign aid, arguing for a redesign of foreign aid strategies. He suggested that a sustainable aid project would be to expand the national tax net to enable and encourage more people to pay their taxes – that is, not to give money to corrupt governments but give it to the people.

He has also written two opinion pieces for the Financial Times:

In addition to both his graduate study and recent media appearances, Parajuli is a Peter Martin Fellow with the Financial Times. For Summer 2017, he has joined the leader-writing team of the FT, and writes articles that represent the paper’s view on different topics. In the past month, he has written about 10 leaders on tech regulation, gender equality in silicon valley, the slide in Pakistani democracy, and other topics. Most of these pieces have been published without a name as they represent the view of the paper as a whole.

“The best part of the fellowship,” Parajuli says, “is being part of the conversation as the paper's top editors debate their stand on important global issues. The downside is that every comma splice ends up before the editor-in-chief of the paper himself so you have to be extra careful about what you write.”

Abhishek Parajuli completed an MPhil in Comparative Government at Nuffield and in 2017 commences his doctoral studies in the College, researching the political economy of development with a focus on corruption. He also uses experiments to see if foreign aid hurts development by hurting citizen demands for accountability in developing countries. His other research interests include gender and racial bias in politics; civil-military relations; civil wars; democratization; empirical legal studies and experimental methods.