The heated nature of the public discourse around Brexit suggests that the British public are not in a compromising mood, but is there evidence to back this up?

The findings come from a survey of 5000 people in which they were asked to imagine themselves at the negotiating table with the EU trying to get the best possible deal for the UK. They were then provided a list of seven important issues and asked respondents whether they would drop the demand (“deal”) or if they would be prepared to negotiate (“budge”) or if this was an issue on which they are absolutely unwilling to compromise (“red line”). 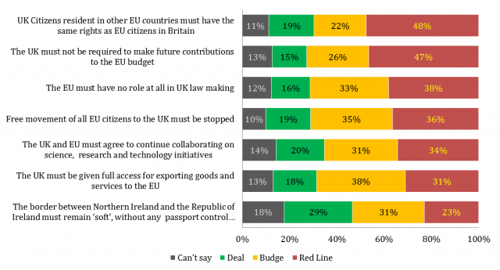 Their results suggest there is more to see than the ‘two tribes’ politics of leave and remain.

For example, the survey results show that people seem to care the most about citizens’ rights, with 48% naming this as a red line, while 47% mention that future contributions to the EU budget are a no-go. Law-making (aka sovereignty) comes in at third with 38% followed by stopping free movement of people at 36%. People were the least likely to designate the Irish border as a red line.

Read their blog on the University of Nottingham website for further insights on the results of their research to date.