Who are the "Children of Austerity"?

Professor Brian Nolan discusses the lessons to be learned from examining impacts of the 2008 financial crisis on children across a variety of rich countries.

Nuffield Senior Research Fellow and Professor of Social Policy, Brian Nolan, will be giving a talk on his latest book at the Oxford Martin School on 7 November 2017.

The book, "Children of austerity: impact of the great recession on child poverty in rich countries" was edited by Brian Nolan, along with Bea Cantillon, Yekaterina Chzhen and Sudhanshu Handa. 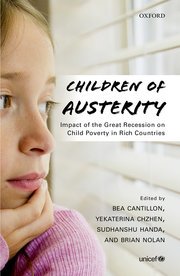 The analysis underlines that countries with fragmented social protection systems were less able to protect the incomes of households with children at the time when unemployment soared. In contrast, countries with more comprehensive social protection cushioned the impact of the crisis on households with children, especially if they had implemented fiscal stimulus packages at the onset of the crisis. Although the macroeconomic 'shock' itself and the starting positions differed greatly across countries, while the responses by governments covered a very wide range of policy levers and varied with their circumstances, cuts in social spending and tax increases often played a major role in the impact that the crisis had on the living standards of families and children.

Further information about the event is available on the Oxford Martin School website.