On 9 November 2017, in excess of 40 academics, policymakers, practitioners and journalists came together for a one-day workshop to take fiscal policy seriously. The day began with an opening address by Roberto Perotti (Bocconi), who expressed concern that the European fiscal policy framework was too complicated and that recent proposals for the creation of European safe bonds have been enormously misunderstood. The remainder of the morning was devoted to optimal debt management, with Martin Ellison (Oxford) using his newly-created historical database of UK gilts to argue the advantages of the government issuing short bonds, a position that Elisa Faraglia (Cambridge) supported with her theoretical work showing that it is optimal for the government to issue a mixture of short and long bonds if the government is unable or unwilling to buy back long bonds. Michael Lamla (Essex) and Ricardo Reis (LSE) provided insightful commentary.

The afternoon session started with a keynote address by Rupert Harrison (BlackRock) describing the political and economic constraints faced by fiscal policy and debt management in his time as Chief of Staff to Chancellor George Osborne. The state of the academic literature on optimal debt management was then summarised and discussed by Dimitri Vayanos (LSE), with particular reference to clientele effects that arise due to generations ovelapping in the economy. The workshop concluded with a panel of experts discussing the current best practice and future outlook for Fiscal Councils. Skillfully moderated by Michal Horvath (York), the panel benefitted from Laura Van Geest (CPB Netherlands Bureau of Economic Policy Analysis) drawing on the long history her institution that was founded in 1945, and from the more recent experiences of Robert Chote (Office for Budget Responsibility) in the UK. Roel Beetsma (University of Amsterdam and European Fiscal Board) brought a welcome pan-European perspective to the role of Fiscal Councils.

The workshop was organised by Martin Ellison (Oxford),Andrew Scott(LBS) and Michal Horvath (York). 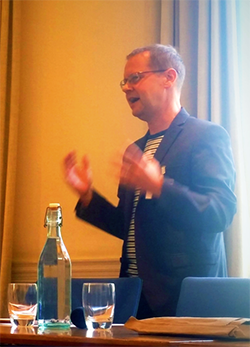