From September 1947 to December 1948, David Butler spent an eventful 16 months in the United States. He began as a postgraduate at Princeton University, studying the emerging field of opinion polling, with lectures from Dr Gallup, and repeated visits to the Survey Research Centre in Michigan, then the leading world centre for the study of polling.

Opinion polls were increasingly seen as performing miracles in the 1940s, but political polls had their first major upset in the presidential election of 1948 when a widely anticipated landslide for Republican candidate Thomas Dewey actually turned out to be a comfortable re-election victory for Democrat President Harry Truman. Butler observed the Survey Research Centre’s response to the polls, before, during and after the election.

During the last six months of 1948, Butler undertook a remarkable road trip across the United States, hitch-hiking from East to West, and North to South. The daily diary Butler kept is a particularly rich resource, full of vignettes of everyday American life, while Butler also kept an election straw poll as he hitch-hiked, finding that Truman was likely to do unexpectedly well.

Furthermore, Butler followed politicians at every opportunity. He covered the Democrat, Republican and Progressive Party conventions as a foreign correspondent, met up with politicians like Minneapolis Mayor (and future US Vice-President) Hubert Humphrey on the campaign trail. His well-connected Oxford tutor Isaiah Berlin provided letters of introduction to everybody from leading conservative Supreme Court Justice Felix Frankfurter to the young Democrat Congressman John F. Kennedy.

All items, unless otherwise stated, are from David's private collection of papers, with permission granted to reproduce on this website. 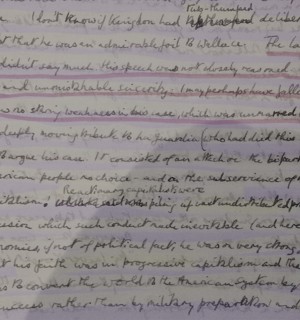 Henry Wallace addressing a meeting of the Progressive Citizens of America. Paul Robeson sings and speaks at the Henry Wallace meeting. 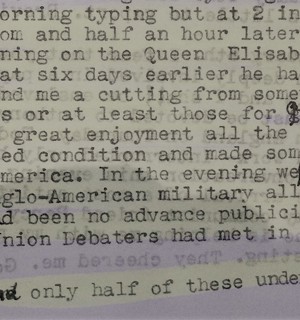 More on Benn's visit to Butler in America. Butler is impressed by the young John F. Kennedy.